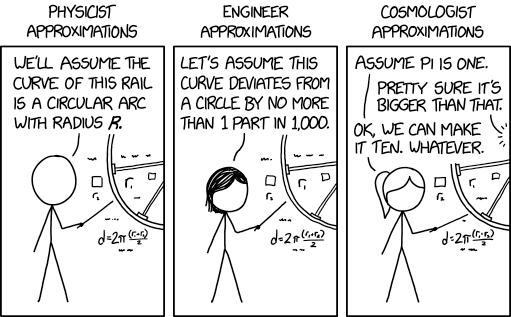 Types of Approximation from xkcd

Deep learning is a hot topic in recent years, there are a lot of articles explaining its principle in mathematics.

OpenAI released language generator GPT-3 shows us artificial intelligence in deep learning can behave in similar way as humans do. It can ask question, answer question and write articles that make us believe it will pass the turing test.

Now a question pops up

Well, it behaves like human brain but it is not the same.

To explain why it works, we need to know GPT is using deep learning technology which do approximations. So what does GPT-3 approximates to?

Remember earlier we talked about how game theory works? Game thory approximates the choice of action without consider the complex thinking inside human brain. Now, what does GPTs approximate to? Choice of words.

That reminds us of Markov Chain.

It behaves and works in a similar way. except there is no “word” for GPT-3, words are mapped into vectors. Thanks to Word2Vec, words are transformed into vectors in continuous latent space.

With the latent space, GPT-3 can have more than one direction for the choice of words while Markov chain is in single direction.

GPT-3 do not know what it says

Some one gave GPT-3 a turing test.

We can see that GPT-3 is capable of organizing words in a way humans do, but it does not think with logics. Not today I guess.

It is similar to game theory, we simplify human behaviour with matrices and payoffs as whatever complex one thinks, there are limited actions one can take in the game. So we can simplify the thinking and approximate human behaviour.

And by the way, people don’t really think much in organizing words, so it is easy to do approximation. ;)

More about GPT-3 in the view of deep learning: How GPT-3 Works @jalammar

Grammar of this article was checked by the “transformers”, many thanks to them:

Image from Intro to GPT-3
CatalogOverview